On Wednesday I took my daughter Ellen up to Birmingham to drop off some bags and check on her flat (she’s been in California for a few weeks). Afterwards we went shopping in the city and I came across these beautiful paperclips made from flat copper wire.  They could have been especially designed for me and for Spiral (Easter) Sunday!  I couldn’t resist them and bought a bottle of 100. Spiral Sunday this week features a couple of photographs I’ve been sent recently.  The first is from one of my PhD students, Alex Laws, taken on a trip to Cornwall earlier this year.  The artist is James Eddy, not a name I was familiar with, but definitely worth checking out, especially as he is a land artist too.

Which leads us to the second picture, sent to me by a Polish colleague, Marcin Zych, of a spiral-shaped piece of land art he found near Olomouc, in the Czech Republic.  It reminds me (on a smaller scale) of Robert Smithson’s amazing sculpture Spiral Jetty (of which I was unaware until it was kindly introduced to me by Carrie McLaughlin of the Texas Pollinator Powwow). 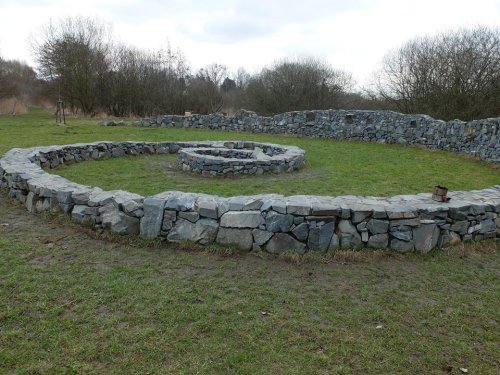 Many thanks to Alex and Marcin, and to Carrie too. 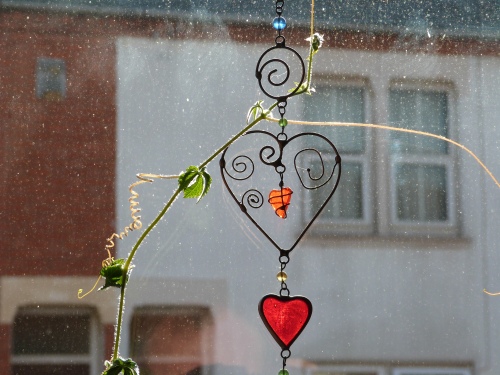 The sun was illuminating the coloured glass of a window ornament and I noticed two things: (i) the lovely juxtaposition between the metal spirals of the ornament and the spiral tendrils of Cyphostemma simulans, a member of the vine family (Vitaceae) that I grew from seed many years ago; and (ii) the fact that our front windows really need washing….  No time for that this weekend, though, been too busy working in the garden with Karin!  That’s Spiral Sunday, enjoy the weather while you can. 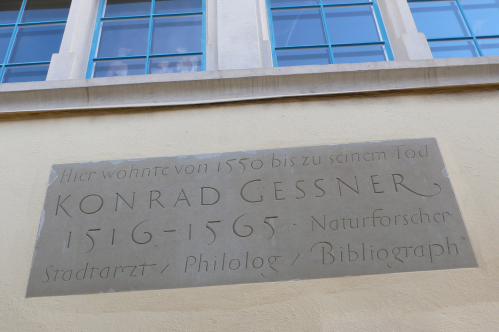 Happy Conrad Gesner Day!  Who is he, you may ask?  And why does he have a day?  Conrad Gesner (sometimes spelled Konrad Gessner) was a Swiss naturalist and polymath, born on this day (26th March) in 1516; he lived much of his life in Zurich, where he died on 13 December 1565.  Gesner was an extremely important figure in Renaissance science and scholarship, and when I visited Zurich in 2008 to give a seminar at the university, a tour of the old town revealed a number of references to the great man, including the memorial stone above.

Gesner’s Historia animalium (“History of Animals”)  is considered one of the founding texts of modern zoology, and for that reason he is memorialised in the name Gesneria Hübner, 1825; this is a genus of moths in the family Crambidae.

However Gesner was also a botanist and wrote a couple of books on the subject, though his Historia plantarum was not published until two centuries after his death.  To celebrate Gesner’s botanical achievements Linnaeus erected the genus Gesneria L. for a group of flowering plants.  Sounds odd to have the same name for two very different types of organism, but this cross-kingdom duplication of genera is allowable under the various codes of taxonomic nomenclature.

Gesneria in turn is the type genus for the family Gesneriaceae.  It’s quite a big family (about 3,450 species in 152 genera) and is ecologically important in the tropics and subtropics, where species may be pollinated by insects and birds, and are often epiphytic on trees.  It’s not a particularly economically important family, though a number of genera are widely grown as ornamentals, and there are specialist gesneriad growers and collectors.  The more familiar plants include those mainstays of Mothering Sunday (which by coincidence is also today) African Violets (Saintpaulia), Cape Primroses (Streptocarpus) and gloxinias (Gloxinia): As I was looking through my photographs from the trip to Zurich in 2008 I spotted the following image of some wrought ironwork from the old city which may well be contemporary with Gesner.  This seems a fitting way to celebrate both the great man and this week’s Spiral Sunday: 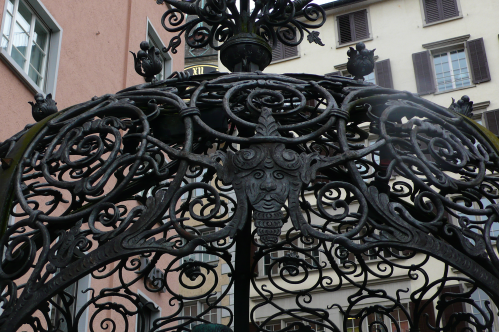 Today Karin and I took a drive up to Birmingham to visit my daughter Ellen, who is studying applied performance and community theatre at Birmingham School of Acting.  After picking her up we went for lunch at Birmingham Botanical Gardens.  Now, I’m a bit of a botanic gardens collector; I love visiting them, and keep a life list of those I’ve visited and a wish list of those I’d like to visit.  So I was sure I had been to the Botanical Gardens as a PhD student during a British Ecological Society conference at the University of Birmingham.  But when we arrived there I had no recollection of the glasshouses or the layout, it was not familiar at all.  Odd how the memory plays tricks, one way or another.

I can recommend a visit, though – the Gardens looked stunning even this early in the season; lots of plants in flower and even a buzzard circling low overhead.  It being Spiral Sunday, of course, I was seeing spirals everywhere; in the unfurling fronds of a tree fern (Blechnum gibbum): On a cast iron garden seat: 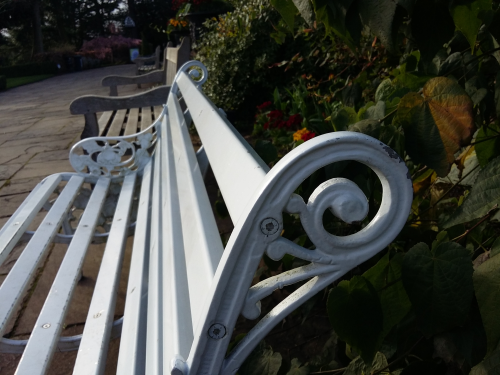 In the flowers of a variety of camellia: 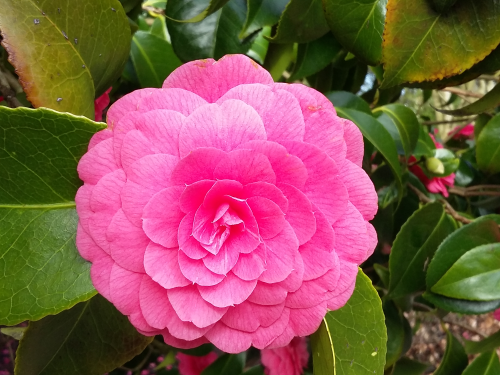 In the leaves and flower cones of Banksia grandis: 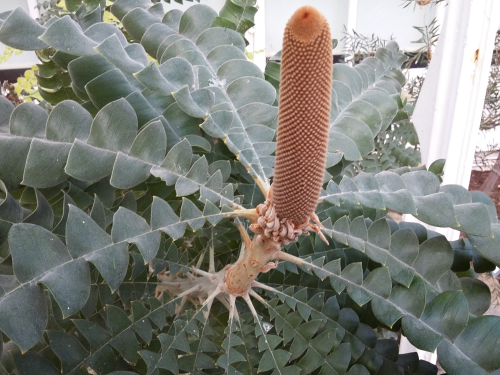 And in the design of a sun hat in the Gardens shop: 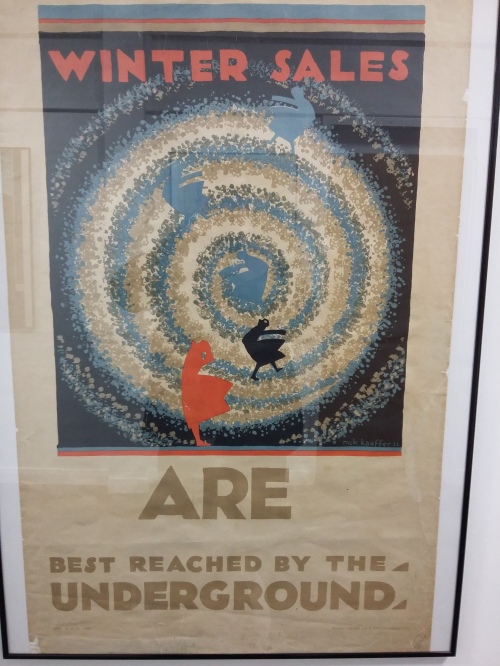 The University of Northampton is custodian of one of the best collections of posters in Britain.  The Osborne Robinson Collection now contains over 10,000 items and the university regularly displays them internally and at other venues.

This week’s Spiral Sunday shows a poster currently on display that caught my eye as I was passing.  The poster is by Edward McKnight Kauffer for London Underground (or Underground Electric Railways Co. of London, Ltd as it was), and dates from 1922.

Filed under Spirals, University of Northampton 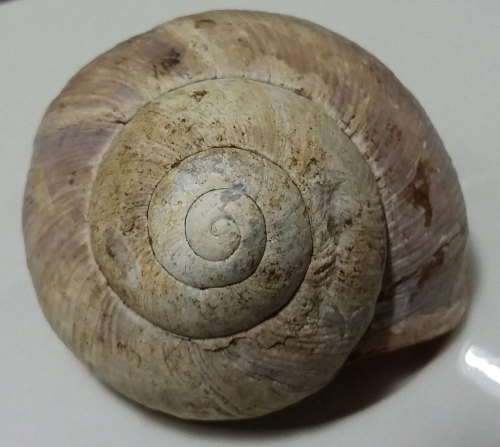 Although it is technically a non-native species, as it was almost certainly brought to Britain by the Romans, Helix pomatia (the edible or Roman snail) is nonetheless protected by the Wildlife and Countryside Act (1981), and in England it is an offence to sell, collect, kill or injure this species. That’s an unusual situation for an alien animal or plant in this country, and I’m struggling to think of another example – are there any?

Regardless of its status, the large shells of the Roman snail (several times bigger than the common garden snail Cornu aspersum when fully grown) form a beautiful spiral for today’s Spiral Sunday posting.

Thanks to Dr Tim Astrop for allowing me to photograph this dead specimen. 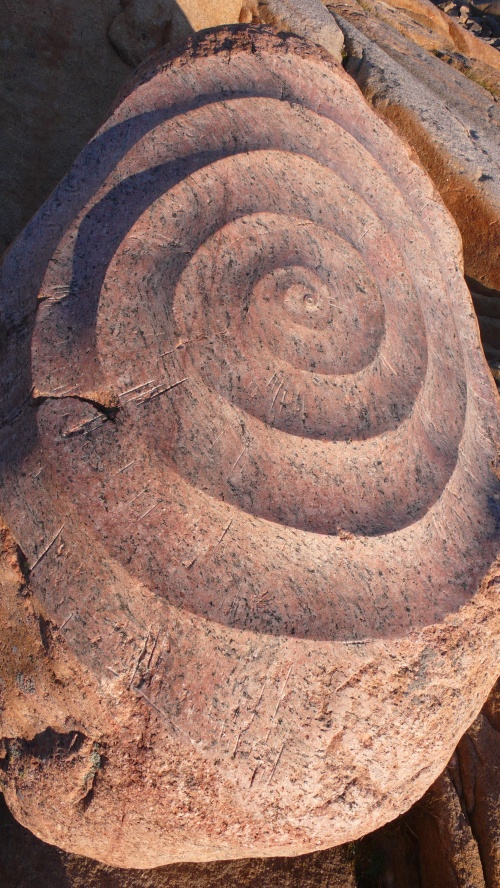 I took this week’s Spiral Sunday photograph at a small sculpture park in an old quarry on the coastal path on Kirkøy (Hvaler) in Norway when we were attending the SCAPE 2012 conference in Skjærhalden.

If I recall correctly it was late afternoon and there was a wonderful low light on the stones, hard shadows sharpening the carved edges of the sculptures.  It was magical to come across these sculptures unexpectedly on a long circular hike; I’d recommend a visit if you are in the area. 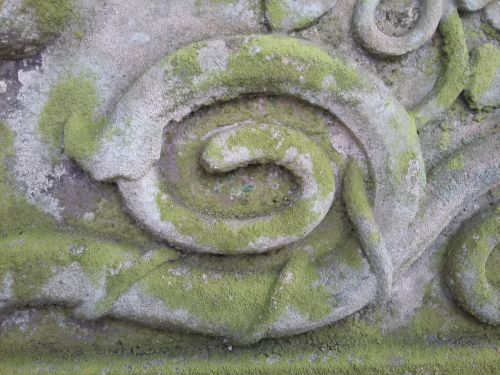 Karin and I went for a long hike today in the north of the county, a five mile circuit from Easton on the Hill, through Stamford, and back past the amazing ruins of Wothorpe Towers.  In the churchyard at Easton I photographed today’s Spiral Sunday image, a stylised botanical form carved into a slab of the local limestone, a 19th century grave marker for a former inhabitant of the village.  As a bonus, here’s the full carving: I really like the twining bindweed. 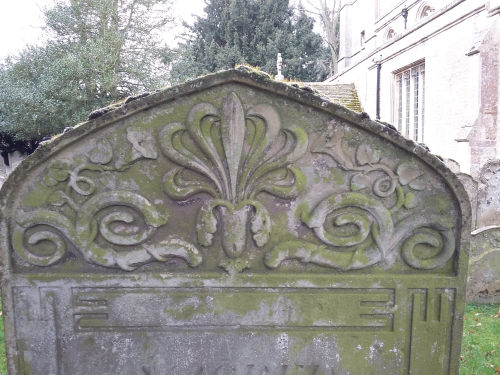 Waxwings on my birthday! 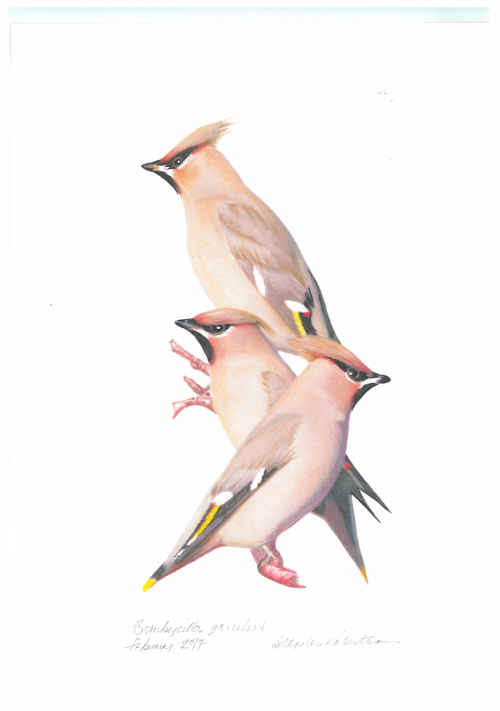 Waxwings (Bombycilla garrulus) may possibly be my favourite bird, and I’ve posted a couple of times about encounters with them – see: Waxwing winter and Waxwings in Northants.

So for my birthday last weekend I was stunned and delighted by a gift from my wife Karin: a specially commissioned illustration of waxwings by a very talented artist friend of ours, Stephen Valentine, who is based in Denmark.

I think Stephen has beautifully captured both the alert intelligence of these birds, always on the look-out for food and predators, and their subtle and striking colouration.  It’s such an honour to own a piece like this!

If you’re interested, Stephen regularly takes commissions; you can find him on Facebook by searching for “Studio Sejerø”, or I can put you in touch with him.

Thanks Karin, thanks Stephen! 🙂