This morning I spent an hour gazing out of our bedroom window with a coffee, a notebook, and a pair of binoculars.  Not sure what the neighbours opposite us thought I was doing but I was happy – this weekend is the RSPB’s Big Garden Birdwatch!  I’ve taken part in it every year since Karin and I moved into our present house in February 2012, and I thought it was time to show the results to date.

As you can see in the graph above, for the first couple of years there were relatively few birds (only 6 species in 2013, 8 in 2014).  Then in 2015 it jumped to 15 species, including some that I’ve not recorded in the garden since such as Lesser redpoll.  Two reasons for this sudden increase I think.  First of all, January 2015 was particualrly cold which meant that more birds were moving into urban areas looking for food and a little more warmth.  But secondly, and the reason why higher bird diversity has been maintained since then, is that we’ve been developing the garden and planting more shrubs, small trees, etc.

This planting and development of the garden has been good for other wildlife including bees, butterflies and other pollinators, as I’ve recounted a number of times.  So here’s a close up from last summer just to remind us that, on this grey, drizzly January day, spring is not so far away: 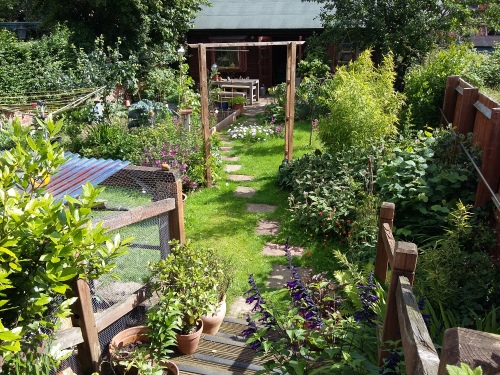 Of course you don’t need to have a garden to take part in the Big Garden Birdwatch – the RSPB also accepts data from surveys of public parks and green space.  In fact tomorrow morning I’m leading a group of residents around our local park, The Racecourse, to do just such a survey.

Right, must go and upload this years data to the RSPB’s site.

The environmental argument for the UK remaining in the European Union

Every week I receive an email bulletin called Science for Environment Policy, sent out by the Directorate-General for Environment, which is the European Commission department that sets and monitors European Union policies relating to the environment, for example pollution levels, conservation of biodiversity, etc.  Anyone can subscribe to these bulletins and they provide useful, lay-person summaries of recent research findings that have a direct or indirect bearing on how we manage and protect Europe’s environment.

A scan through the latest few bulletins reveals article titles such as:

This set of topics is fairly typical, and demonstrates the complexity and breadth of the environmental issues facing the European Union.  All of these issues, however, share one feature: they do not respect political boundaries and are cross-border in scope.  Species, rivers, air masses, sea currents, economic resources, waste products: all of them can (and do) move through the different countries of Europe and beyond.

What this means is that the policies, laws and regulations that govern the behaviour of individuals and organisations towards the environment, and ultimately protect it, must also be cross-border in scope.  That’s where the European Union comes in, because it is largely EU directives that currently protect our environment.  Some examples of these directives, and some of their achievements, include:

There are many others, and you can find a list here.  It’s worth pointing out that these directives were not “imposed” on the UK by faceless bureaucrats in Brussels: the UK took an active role in their development and drafting.  In fact Boris Johnson’s father, Stanley Johnson, was one of the original authors of the Habitats Directive and is a prominent advocate of remaining in the EU.

Of course, no one is arguing that these directives are the only mechanism for protecting the environment, there are local regulations too, plus the work of NGOs such as the RSPB and the Wildlife Trusts.  Nor am I arguing that they have been wholly effective: there’s still a long way to go in many of these areas.  But they have had a demonstrably positive impact on the quality and protection of the UK’s environment that could be halted, or even reversed, if the UK was to leave the EU.

This last point is an important one to make and it’s not an example of the fear-mongering that has marked the EU Referendum debate on both sides.  Here is how I see it:  we cannot trust the UK government (whatever its political flavour) to safeguard our environment.

This is because, despite the best efforts of genuinely committed and environmentally savvy politicians, the political parties to which they belong are too focused on short-term goals of winning the next election to really consider the 20, 50, or 100 year perspectives that are required for environmental legislation.  This inevitably means that the environment is low on the list of priorities for most ministers, and environmental policy is subject to undue influence by special interest groups.  For example look at how easily Defra was persuaded to allow exceptions to the EU moratorium on neonicotinoid pesticides.  Likewise the HS2 project which ministers seem determined to keep going despite serious concerns about the environmental impact of the project (see my post “Ordinary by Choice“).

When considering whether or not to vote to remain in the EU, most people (understandably) are focused on the social and economic arguments: the impacts on jobs, standards of living, resources for health, etc.  But in part the environmental argument is a social and economic argument, because the natural environment underpins many jobs, our standards of living (who doesn’t want to live near unpolluted green space that is protected for future generations?), and plays an important part in the nation’s health and wellbeing.  The provision of these “ecosystem services” were clearly spelled out last year in Tony Juniper’s book What Nature Does for Britain, which I reviewed on this blog.

I’m not arguing that everything in the European Union is perfect, or even that the environment of the UK and the rest of the EU is as good as it ought to be, or could be.  But for every statistic about declining species and poor environments, it’s possible to quote figures for the success of other species and improvements in quality.  For example our major rivers such as the Thames, Tees, Mersey and Avon are now swimming with fish where once they were swimming with excrement, as I’ve previously discussed in relation to the River Wear.  Our membership of the European Union is, at least in part, responsible for these positive trends and I hope that they continue.  Please consider this when you’re deciding how to vote on 23rd June.

Postscript: much of what I’ve discussed above is being widely talked about amongst environmentalists, and I don’t know of any major environmental organisation that is in favour of the UK leaving the EU.  In fact a large number have publicly come out in favour of staying, including:

The RSPB and WWF-UK, who have produced a joint statement.

Friends of the Earth

There is also a group called Environmentalists For Europe

So don’t just take my word for it.

Our nature conservation laws need to be defended, not weakened

If you’ve not already heard, there’s a proposal going forward in the European Parliament to review (=weaken) the current EU Nature Directives.  If this happens some of the most important wildlife sites, as well as vulnerable species, could be at risk in the UK and the rest of Europe.

If you have any strong feelings about nature conservation, or if you simply want more information about what’s happening, then I’d urge you to visit the RSPB’s page where you can watch a video about the issue and/or complete a short form to add your voice to the consultation process.

Something for the weekend #5

The latest in a regular series of posts to biodiversity-related* items that have caught my attention during the week:

Feel free to recommend links that have caught your eye. 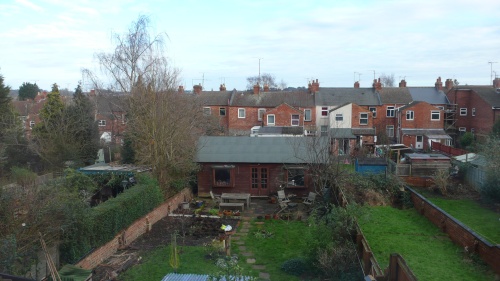 As I posted yesterday, this weekend is the RSPB’s Big Garden Birdwatch, the world’s largest wildlife-watching event, and one that’s been running for 36 years.  I completed my hour of surveying between 09:04 and 10:04 this morning, and it’s been a bumper year!  Armed with a notebook, binoculars, and a cup of coffee, I recorded all the different bird species I observed in the field of view from the tall silver birch to the left across to the patch of brambles on the right (my “garden”, as you can see, encompasses parts of my neighbours’ gardens too).

In 2013 (the first year I did the BGBW at this house) I recorded a disappointing 6 species; in 2014 it was 8 species; this year it’s been a whopping 15 species!  They were (in order of first observation, with numbers of birds):

Not bad for an urban garden!  Did you do the BGBW this weekend?  How many species did you count? Was it a higher count than last year? 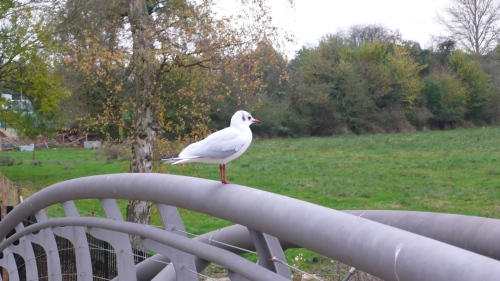 This weekend the RSPB will be running its annual Big Garden Birdwatch, a great example of citizen science in support of biodiversity monitoring.  No matter where your garden is or how small it might be, if you have time, please do get involved.  Even a return of zero birds is useful information because it tells us where birds are not occurring.

As I have for the past couple of years since we moved into this house, I’ll do my hour of watching on Sunday morning from the bedroom window.  Hopefully the current cold weather will persist and bring birds into the garden that are normally found out in the wider countryside.