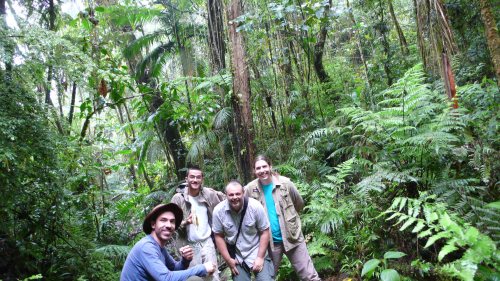 There’s a long-standing idea in biology that ecological specialisation is an evolutionary “dead end” from which species can never emerge.  In other words, if a species becomes so adapted to a particular ecological strategy (could be feeding or habitat requirements or how it interacts with other species ) then no amount of natural selection will result in its descendants evolving different strategies, thereby diversifying into new species.  In particular it’s traditionally thought that evolving broader, “generalist” strategies from narrower, “specialised” ones is highly unlikely.

This has been much discussed in the literature on the ecology and evolution of pollination systems, where traditionally this “dead end” scenario has been accepted.  However a small number of case studies have shown that generalised pollination systems can evolve within much more specialised clades, beginning with Scott Armbruster and Bruce Baldwin’s study of Madagascan Dalechampia (Euphorbiaceae), published in Nature in 1998.

To this limited body of examples we can now add another case study: in the genus Miconia (Melastomataceae), generalist nectar/pollen rewarding strategies can evolve within a clade of plants that predominantly uses a more specialised, buzz-pollinated strategy involving just bees.

The work is part of the PhD research of Vinicius de Brito who is one of the researchers I was privileged to do some field work with in Brazil when I was there in 2013 – see my post: “It’s called rainforest for a reason, right?  Brazil Diary 6“.  Vini is the guy on the left of the photo accompanying this post.  Here’s the citation and a link:

Generalist plant–pollinator interactions are prevalent in nature. Here, we untangle the role of nectar production in the visitation and pollen release/deposition in Miconia theizans, a nectar-rewarding plant within the specialised pollen-rewarding plant family Melastomataceae. We described the visitation rate, nectar dynamics and pollen release from the poricidal anthers and deposition onto stigmas during flower anthesis. Afterwards, we used a linear mixed model selection approach to understand the relationship between pollen and nectar availability and insect visitation rate and the relationship between visitation rate and reproductive success. Miconia theizans was visited by 86 insect species, including buzzing and non-buzzing bees, wasps, flies, hoverflies, ants, beetles, hemipterans, cockroaches and butterflies. The nectar produced explained the visitation rate, and the pollen release from the anthers was best explained by the visitation rate of pollinivorous species. However, the visitation rates could not predict pollen deposition onto stigmas. Nectar production may explain the high insect diversity and led to an increase in reproductive success, even with unpredictable pollen deposition, indicating the adaptive value of a generalised pollination system.

As always, I’m happy to send a PDF to anyone who wants a copy, just drop me an email.