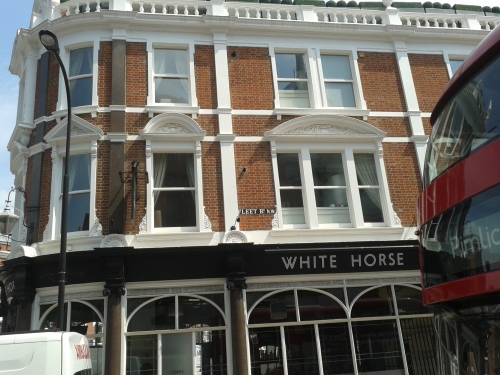 A few weeks ago my sons Patrick and James and I spent a very enjoyable day walking the full length of the River Fleet at the invitation of my colleague Ian Livingstone, together with his wife Jane, her Australian colleague Matt Butler and his partner Kate.  “Walking the River Fleet” sounds like it should involve a gentle, rural amble along willow fringed banks, accompanied by clouds of damselflies and the occasional splash of a water vole sliding into the shallows. And that’s exactly what it was like –  two hundred years ago.  Nowadays “walking the River Fleet” is an urban hike through heavily built up areas in one of the largest cities in the world, for the Fleet is a “Lost River” of London, commemorated only by the names of streets and businesses: 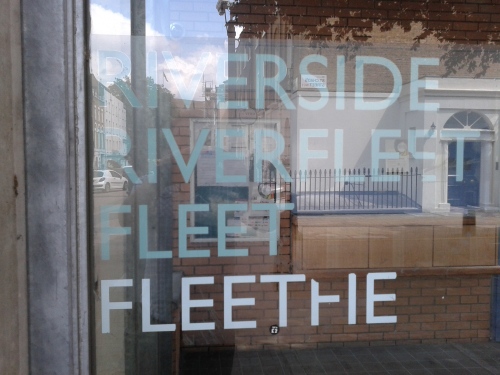 Our 7 mile walk started on Hampstead Heath where the Fleet rises and feeds a series of 18th Century ponds, originally reservoirs and now used for bathing and recreation.  As we walked I began to list the birds that we saw and, of course, these ponds added considerably to the list as diversity of habitats = diversity of species. In fact one of these water bodies is known as Bird Sanctuary Pond and in less than a minute yielded coot, mallard, black-headed gull, common gull, mute swan and tufted duck.  None of which you can see in the following photograph: 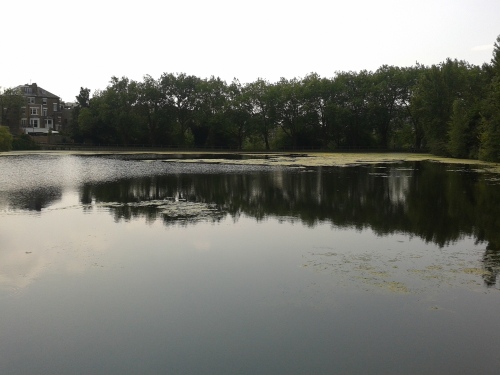 From Hampstead we walked through winding streets that occasionally name-checked the river we were following (see the top photo on this post) down into Camden, where we stopped beside the canal to eat lunch and tick off another water-associated bird, Canada goose.  Then on to St Pancras where we paused at St Pancras Old Church and imagined the Fleet running past it in the early 19th century, before pollution and the need for more land on which to build had submerged it beneath the surrounding infrastructure:

The churchyard is a green oasis in this part of London and we looked at the Thomas Hardy gravestones, which are being slowly absorbed by the bole of an impressive ash tree: 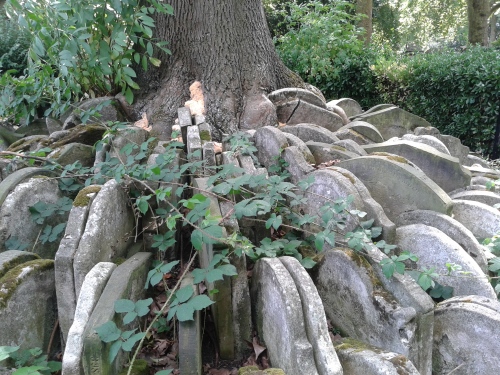 We continued through St Pancras, where the river runs under the attractively refurbished railway station (a huge contrast to the horrors of Birmingham New Street), and on to Holborn, past Fleet Street (of course)…..

….to our final destination at Blackfriars.  All the while we were following subtle changes in the geography of the urban landscape, often obvious only to a physical geographer such as Ian, because the river is wholly covered and has been confined to pipes and sewers.  The Fleet emerges into the Thames beneath Blackfriars Bridge where it is visible at low tide, part-hidden in the shadows of this image which could only be taken by hanging precariously over the river (where I also ticked herring gull):

When ecologists think about the environmental changes associated with “urbanisation” we’re often considering processes that are modest in scale and impact, perhaps the building of a new housing development on what was once farmland.  Sometimes such urbanisation can have positive effects for biodiversity, for example gardens increasing local populations of birds and beneficial insects such as pollinators.  But in the case of metropolises like London, the effect of urban development has been to wholly remodel the physical geography of the landscape, covering or filling in features such as open rivers, ponds and valleys that would once have harboured wildlife, replacing them with stone and steel and concrete, and the occasional London Plane tree to provide shade on a hot day.  Restoring these culverted rivers has become an important focus for research and action.  While doing some reading for this post I came across Adam Broadhead’s blog about Sheffield’s rivers and the work he is doing on “daylighting” water courses that have been hidden.  It’s exciting stuff and has great potential for both urban biodiversity and the quality of life of city dwellers.On the way back to the tube station we passed through the surrounding gardens of St Paul’s Cathedral and encountered the Robert Hooke Biodiversity Bell: 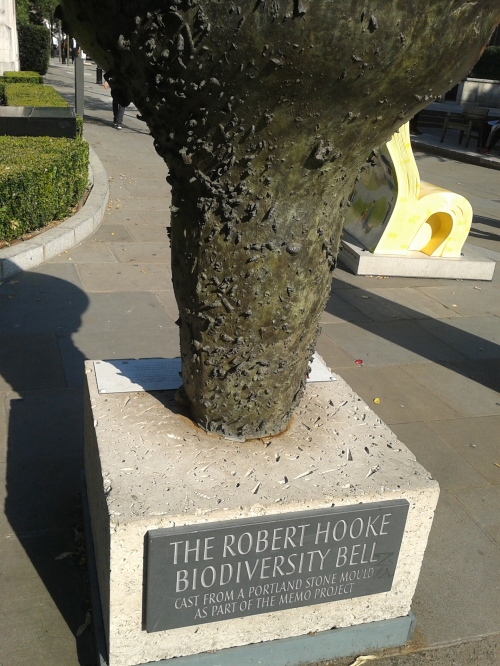 This is part of the Mass Extinction Monitoring Observatory project and marked a fitting end to our trip, a reminder of the populations of organisms that were displaced as the River Fleet was first polluted then enclosed.  Perhaps opening up the Fleet and regaining this biodiversity is too much of a task in a city with some of the highest real estate prices in the world, but as I’ve said before, we can always dream a river.The final total of birds for the day was a paltry 14* – how many might it have been if the Fleet was still a visible, viable water course?

9 responses to “Fleet on foot”